This years paddlefest will be held on September 21st – 23rd in Hidden Valley, Rathdrum, Co. Wicklow.

– A weekend away for juniors aged 10 to 18 years who are members of Canoeing Ireland and who hold a Level 2 skills award or equivalent where they are introduced to the different canoe / kayak disciplines.

– Hidden Valley Holiday Park, Rathdrum. This is a camping and caravan park, with a small lake in the middle of the park and the River Avonmore bisecting the park. There are a number of chalets onsite. Otherwise, it’s camping or caravanning. There is also an adventure playground, burger bar and coffee shop onsite

– covers Paddlefest activities and lunch on 22nd and 23rd September only

Accommodation to be arranged with, and paid directly to Hidden Valley Holiday Park. Contact the park on 086 7272872 to book your onsite accommodation

Ferryglide – A maneuver used to cross a current with little or no downstream travel. Uses the current to move a boat laterally.

Eddy – Place in the current where water flows around an obstacle, such as a rock, and then reverses course to fill in the space behind it. Offers a haven from the flowing current.

Roll – Technique to right an overturned kayak or canoe without getting out of it.

Carp – A failed roll in which the boater manages to get his lips above water to take a hasty breath.

Chine – Transition area between the bottom and the side of the boat. Hard chines are angular; soft chines are rounded.

Cockpit – The opening in the deck of a kayak where the paddler sits.

Bearing – The direction you want to go to reach your destination.

Heading – The direction your bow is pointing.

Lee – An area protected from the wind; also the quarter or region toward which the wind blows.

Portage – Derived from the French word for “carry.” A fancy name for carrying your boat around a difficult rapid or other obstacle.

Hole (also, hydraulic, keeper) – A spot where water tumbles over an obstacle and reverses course upon itself. Can trap boats from continuing downstream.

Beatdown – What sometimes happens to a boater caught in a hole.

Boil- this is a water feature created when water churns upward and creates an elevated region in the river. In big water a boils can elevate and move kayaks several feet in random directions.

Boil Line- this is the line that delineates the water going down stream from the water that is flowing back toward a hydraulic. The further downstream a boil line is from the hydraulic, the more hazardous the feature.

Boof- a boof is a maneuver where a kayaker uses his paddle, rock or water feature to lift the bow of the kayak over a drop, usually performed to avoid a piton or getting stuck in a hydraulic. There are many reasons to perform a boof and this maneuver is the staple of advanced kayaking.

Brace – A stroke used to provide support and prevent the craft
from capsizing.

Swim – Exiting your craft into the water after a capsize.

www.playak.com a website for the global paddling community including articles, news, forums, reviews and buyers guides. 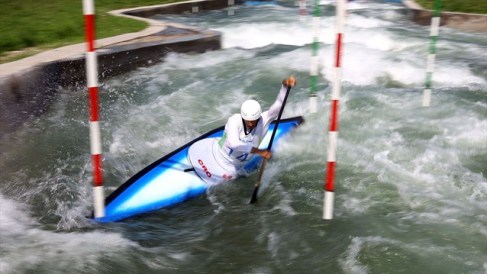 On 29 July the London 2012 Canoe Slalom competition gets underway, marking the sport’s 20th anniversary as a permanent fixture on the Olympic programme.

The Canoe Slalom competition will call for speed, control and precision on the daunting white water rapids at the new Lee Valley White Water Centre.

13,000 litres of water power down the canoe slalom course every second, enough to fill a 25m swimming pool every 30 seconds.